John Quincy Adams from Beyond the Veil

Of the many interesting books housed in the library’s collection, one in particular recently caught our eye: Twelve Messages from the Spirit of John Quincy Adams through Joseph D. Stiles, Medium, to Josiah Brigham.  The book was published in 1859 by Boston publisher Bela Marsh during a time in which the spiritualism movement was growing increasingly popular.  Followers and curious onlookers sought to gain greater knowledge from spirits and speak to their deceased loved ones, usually by attending séances or by consulting mediums.  Spirit photography arrived in the latter part of the 19th century, with one of the most famous examples being the image of a seated Mary Todd Lincoln with the ghost of her husband, Abraham, resting his hands on her shoulders.

According to the book’s preface, Josiah Brigham states that, from August of 1854 until March of 1857, the medium Joseph D. Stiles, while entranced, allowed the spirit of John Quincy Adams to communicate through him using automatic writing.  These sessions were held in Brigham’s home in Quincy, Mass. and at his son-in-law’s home in Boston, and it was Adams himself who requested that the messages be published.  Brigham further states:

Mr. Stiles is a respectable, unassuming young man, of only common-school education, with no pretensions to more than common capabilities.  He is a printer by trade, and worked at that business until he perceived he possessed mediumistic powers.  His organization is such that he is very susceptible to spirit-influence, and is one of the best writing-mediums in the country. 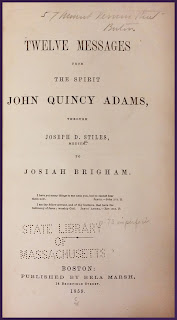 John Quincy Adams’ alleged discourse from beyond the veil is very Dante-esque.  Speaking from “Spirit Land, Sixth Sphere,” he vividly illustrates for the reader what he sees or has seen in the different spheres of the afterlife.  He also describes his meetings with relatives, as well as Biblical and historical figures in the spheres--delivering their many messages of philosophy and morality to the corporeal reader.  Adams also speaks of his visits to earth, during which he would visit living relatives and attempt to prove to mortals the existence of the afterlife.

This book is available online in its entirety and can be viewed by visiting: https://archive.org/details/twelvemessagesfr00stil

Posted by State Library Staff at 8:55 AM