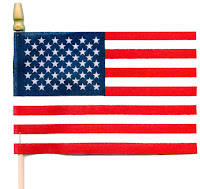 Happy 240th Birthday to the United States! Is history possibly repeating itself with the recent “Brexit” vote and the British desire for a greater control over its own affairs and independence that seems to mirror the events leading up to the American Revolution? Political intrigue is the constant that seemingly makes living either in 1776 or in 2016 most “interesting times” as the famous saying goes.

There is no disputing that Boston is the epicenter as the “cradle of liberty” where the American independence movement all began with “the shot heard round the world” back in April of 1776. Over the ensuing years the popular traditions of celebrating American independence may have changed from formal political orations to informal backyard cookouts, but the spirit of any  celebration still remains true to John Adams’s original notion that American Independence Day “ought to be solemnized with pomp and parade, with shows, games, sports, guns, bells, bonfires, and illuminations, from one end of this continent to the other, from this time forward forever more” (Original letter found here).  Granted, Adams was writing about what some might call the “real” Independence Day, July 2, 1776, when the Second Continental Congress of the original thirteen colonies voted to approve a resolution of independence resulting in a legal separation from Great Britain. It is the July 4, 1776 date printed on the more famous, widely circulated, and ratified Declaration of Independence (not that the document ever called itself by that name!) that has been adopted as our national birthday. 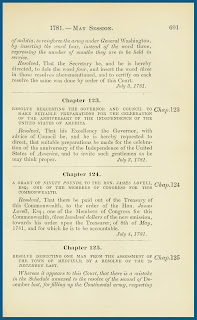 On July 3, 1781 Massachusetts became the first state legislature to recognize July 4, “the anniversary of the independence of the United States of America” as an official state celebration (Resolves of 1781, Chap. 123) and today some of the traditions still celebrated have their roots in how New Englanders celebrated all those years ago.  Of course, what Independence Day celebration now would be complete without a fireworks display? Lesser known is the New England tradition of creating enormous bonfires on the night of July 3 which were the centerpiece of town July 4th celebrations during the early half of the 20th century. The bonfires were generally built from wooden barrels and casks and set ablaze at midnight in order to usher in “a new year of liberty.” During the 1960’s as cardboard replaced wood and as fireworks became a cheaper, safer, and more modern alternative, they replaced the bonfire tradition except in some North Shore towns like Rockport where the July 4th bonfire tradition still continues on..

Another fascinating July 4th tradition is the “Horribles Parades” that take place all over Massachusetts, including in my hometown of Mendon. The parades trace their origin back to the country’s oldest military organization, the Ancient and Honorable Artillery Company of Massachusetts, chartered in 1638. Members of the Company, colloquially known as “the ancients and honorables,” would march in a haphazard collection of different military uniforms and as a result of this outwardly comical appearance to spectators the idea to “mock” them in a parody parade featuring “antiques and horribles” was born and first held in Lowell on July 4, 1851. Other towns were also inspired to participate in this new holiday custom and the “horribles” parades boomed in popularity as competitions sprung up between towns as to which one could have the most outrageous parade. Today the remaining “horribles” parades are more for fun and amusement--featuring adults and children dressed in costumes that commonly lampoon local and national political figures and current events in true satirical New England Yankee fashion. Happy 4th of July!

The State Library’s collections contain numerous resources on the history of the War of Independence and Independence Day.

Posted by State Library Staff at 9:22 AM