The Women’s Suffrage Movement in Massachusetts 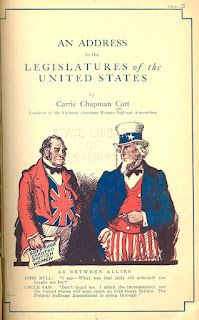 This past August 26th marked the 92nd anniversary of women’s suffrage in the United States! In 1920, the Nineteenth Amendment of the U.S. Constitution was passed, which prohibits the denial of any citizen’s right to vote based on sex. While 92 years seems like such a long time ago, in retrospect it’s still very much recent history. Massachusetts was a hotbed for suffragist activities during the mid-to-late 19th and early 20th centuries, and the state was home to many notable women leading and influencing the cause. For example, in 1870, after forming the American Woman Suffrage Association in 1869 (later becoming the National American Woman Suffrage Association), activists Lucy Stone, Henry Blackwell, Julia Ward Howe, and other supporters of the movement formed the Massachusetts Woman Suffrage Association. These groups worked together, sharing goals and partaking in the same educational, promotional, and legislative lobbying activities that helped push the topic of women’s enfranchisement forward on both state and national levels.

Here are a few more interesting facts about suffrage activities in Massachusetts:

• In 1850, the first National Women's Rights Convention was held in Worcester.


• In 1869, a Joint Special Committee on Woman Suffrage was formed by the Massachusetts legislature. A list of committee members can be found in the 1869 manual of the General Court.


• In 1871, William Claflin became the first governor of Massachusetts to speak publicly and directly about woman’s rights as a citizen.

• In 1879, Massachusetts passed a law that allowed women to vote for school committee members. In that same year, Louisa May Alcott was the first woman to register to vote for the Concord School Committee election in Massachusetts.

• In 1888, an act was passed to incorporate the National Woman Suffrage Association of Massachusetts, founded by Harriet Hanson Robinson.


• In 1895, an act was passed that authorized persons qualified to vote for school committee members to vote on the question of granting municipal suffrage to women at the next state election—this act meant that women could now vote on the issue. 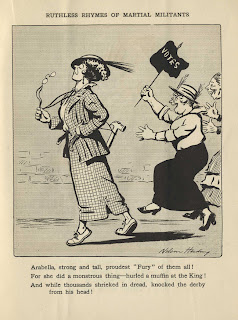 The library has a large collection of materials on the history of women’s suffrage. Some of the most interesting items are bound pamphlets supporting and opposing the movement. One pamphlet’s title, published by the Women’s Anti-Suffrage Association of Massachusetts, glaringly claims “Woman Suffrage a Menace to Social Reform”. Another pamphlet from 1909 by the Illinois Association Opposed to the Extension of Suffrage to Women states, “Unable in spite of heroic efforts for the past twelve years to gain a noteworthy legislative advance, [Suffragists] have been at last impelled to call in the aid of the militant Suffragists of England, and in New York and Massachusetts are adopting, to a certain degree, their noisy and ill-mannered tactics.” A great example regarding British Suffragettes is Nelson Harding’s 1914 “Ruthless Rhymes of Martial Militants”. A note from the author describes his disdain for militant Suffragettes:

Grimly vindictive, the militant rages
In pitiless wrath through the following pages
Benighted termagant, seeking applause
In the name of an honest and suffering cause