Ernest Dudley Chase: A Worldview in Maps: Exhibit now on view at the State Library

A new exhibit at the State Library of Massachusetts highlights original, decorative maps created and published in the 1930s and 1940s by Ernest Dudley Chase, a graphic artist from Winchester, Mass.

Born in Lowell, Ernest Dudley Chase (1878-1966) worked for Rust Craft Publishers, which printed greeting cards at its plant in Dedham. Chase was the acknowledged expert in the greeting card business in the United States with publication of his book The Romance of Greeting Cards (1926), the first complete history of the greeting card industry. Chase’s maps were an extension of his work as a graphic artist for Rust Craft and also reflected an international trend toward pictorial mapmaking. 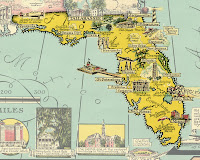 These decorative maps, which experienced a resurgence in public popularity after 1913, are a genre in which the cartography is animated with illustrations of buildings, people, and animals. Often including historical references, the maps also frequently depicted airplanes and other modes of transportation. Borrowing from typical Renaissance cartography, Chase and other pictorial mapmakers used embellishments like compass roses, ornate cartouches, and decorative borders. 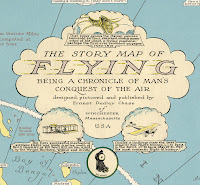 Chase’s maps revel in a colorful, idiosyncratic, and whimsical view of the world. This exhibit of his original cartographic creations showcases maps of Boston, Massachusetts, New England, the United States, and the world.

This free exhibit will be on display outside the State Library of Massachusetts, Room 341 of the State House, Boston, through September 7, 2009.