On Display in the State Library 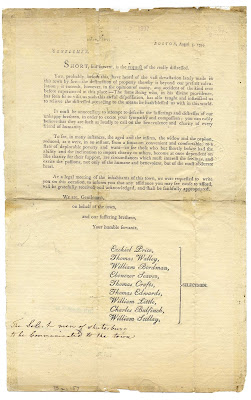 A few months ago the State Library acquired a new exhibit case! Custom designed with UV filters
and SmartGlass, the case allows us to safely display some of our oldest and most important collection items. The contents of the case will change monthly, and while we encourage all of our readers to visit the main reading room to see the exhibited item in person, we will also share the item through our social media accounts and this blog!

This month, we’re displaying a broadside that was distributed as an “Appeal from Boston for Aid after the Great Fire, 1794”.  In 1794, the part of downtown Boston that is currently bordered by Milk, Pearl, Purchase and Congress Streets was home to residences and a number of ropewalks (a long, narrow building where ropes are woven by hand). In the early morning of July 30, a fire broke out in one of the ropewalks and spread quickly, destroying seven ropewalks and approximately ninety other buildings (primarily houses, outbuildings, barns, and stores). The fire was so extensive that additional engines were brought in from Brookline, Cambridge, Charlestown, Milton, Roxbury, and Watertown. An account of the fire was written up in the July 31 edition of the American Apollo, a copy of which is also in the State Library’s collection. The article, titled “Horrid Fire,” describes the affected area, lists the home and business owners who lost property, and thanks the fire engines from neighboring towns that provided assistance.

On August 5, Boston Selectmen issued a broadside in response to the devastation caused by the fire, calling attention to the residents whose lives changed “in an instant, from a situation convenient and comfortable, to a state of deplorable poverty and want.” The broadside was then distributed to cities and towns throughout the state in an effort to raise funds for assistance. The copy in the State Library’s collection was sent to the selectmen of Shutesbury, along with the handwritten instruction to share it with the town, likely as an announcement during a town meeting.

Do you notice a familiar name in the broadside’s list of selectmen? Charles Bulfinch, the architect of the State House (along with other Boston landmarks and the United States Capitol), served as a selectman from 1791 to 1795 and again from 1799 to 1817. During his tenure, he greatly improved Boston’s infrastructure, commercial areas, and public buildings. Stop by the State Library, in the building that Bulfinch designed, to see this document on display through August 29.